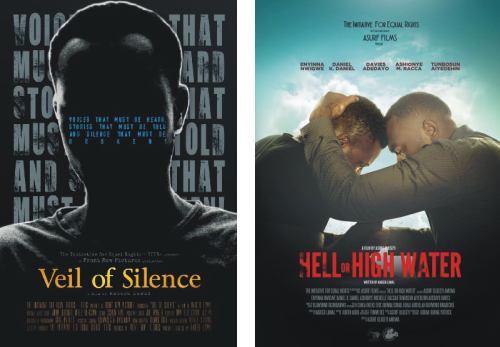 Poster for Veil of Silence & Hell or High Water

The films Hell or High water and Veil of Silence were both produced by TIERs, and have since been screened to many within and outside Nigeria.

The both films have surprisingly met very positive reviews by different Nigeria mainstream media platforms, and as a result, created serious anticipation for many who are now desperately seeking to see the film released.

The film Hell or High Water tells the story of a young pastor loved and adored by the people around him. Things change for him when he has to confront a hidden truth about himself—a truth that could make or break him psychologically. But, whatever decision he makes, he is still going to crash and burn, for life as he once knew it would never be the same again.

Read related: A Must Watch: ‘Hell or High Water’ A Nigerian Film About Sexuality And Religion!

While Veil of Silence a documentary film features and deals exclusively with the lives of gay Nigerians, and as well features expert opinions on the subject of homosexuality in Nigeria, in fact, it captures the very essence of what it truly means to be gay in Nigeria.

Listen to related: ‘Veil of Silence’ is about Human Rights! – Habeeb Lawal

But now finally, the patience and the long waiting will soon be over, as TIERs is seriously making plans to release the films online all for FREE this month. This they confirmed to NoStrings in a chat when contacted.

“Both films are short and they will be available for free. It’s an advocacy project so we don’t charge for this as we want many people to watch and engage so it going to be free across all platforms. The film will be available online via our YouTube channel and other mainstream online media. They said.

They also revealed their plans and expectations toward the release of the films.

“Our expectations are to continue to mainstream alternative LGBTI stories into the mainstream pop culture. People need new narrative that is real and free from any social prejudices. We want people to see what people feel and go through as a result societal pressure and prejudices. They concluded.

So all concerned are therefore encouraged and expected to share the films on their networks once they have been made available online as promised.

NoStrings promises to make available an update once the films have been released.