A Nigerian gay activist faces the possibility of 14 years in jail or even being stoned to death if he is deported back to Nigeria, campaigners claim. 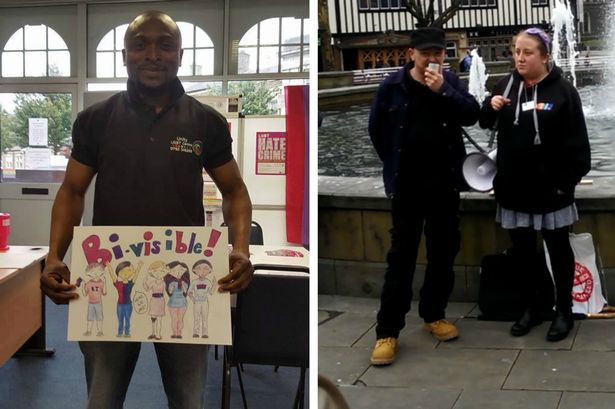 Supporters of Favour Onuzulike held a rally in Castle Square in Swansea’s city centre on Tuesday as part of their campaign to prevent him being sent back to Nigeria,

He has recently been working at the Unity Lesbian, Gay, Bisexual Transgender (LGBT) Centre in Swansea.

But he was taken to a detention centre near Heathrow Airport and on Tuesday night supporters were waiting to hear if last minute appeals to the Home Office were successful in preventing him being deported.

Andrew Davies, chief executive of the Swansea Unity LGBT Centre said: “We fear greatly for his safety if taken back to Nigeria due to the horrific laws the country has against the LGBT community.

“In the southern states people can be imprisoned for being LGBT with a minimum of 14 years.

“And in the northern states people can even face being stoned to death simply for being gay.

“He is now a wanted man back in Nigeria due to his high profile and so would face automatic imprisonment and danger from his very first steps back in that country.

“He was on the front of newspapers across Nigeria for being a wanted man ‘due to homosexuality’ and we are deeply concerned for his welfare.

“As a Gay activist here in Wales, he often has spoken at huge events where he has been entirely open about his identity. He has created the No Going Back Project to support others that have fled LGBT violence in countries around the world.

“This will not help his chances back in Nigeria as activists face huge violence and longer prison sentences.”

A petition opposing Home Office plans to deport Favour Onuzulike has been signed by more than 1,000 people.

Favour Onuzulike fled to the UK for refuge after his partner was murdered for his sexuality in their home country.

At a court hearing in Birmingham last week, Mr Onuzulike was told he faces deportation “on the first available plane to Nigeria”.

“He has made a huge contribution to the LGBT community of Swansea. Nobody should live in fear of their lives for who they are, and if Favour is deported to Nigeria his life will be in danger.

“Wales has welcomed Favour and his work has supported many people in a similar situation as him.

“The Wales Green Party is urging the Home Office to reverse the decision to deport him and back the campaign to allow Favour to return to Swansea and resume his life and his work.”

Swansea East MP Carolyn Harris , a trustee of Unity Group Wales (which runs the Unity LGBT Centre) has said she will raising the issue of Favour Uzulike with Home Secretary Theresa May.

Among those at the rally in the centre of Swansea on Tuesday were ex Swansea council leader David Phillips.

He said: “It’s almost unbelievable what could happen to a man like Favour if sent back to Nigeria and it’s amazing the Government would allow it.”

Ian Muxworthy, chairman of the Board of trustees of Unity Group Wales added: “I was horrified to see British justice which has been developed over a thousand years and I had until last week believed in, totally trampled upon.”

A spokesman for the Home Office said on Tuesday : “We do not comment on individual cases and I am afraid we cannot comment on this case.”