*Rita (not real name) a Nigerian woman who was previously arrested by the police after her ex-husband reported her for allegedly engaging in a lesbian affair, has now been attacked by thugs she said were sent by her husband to kill her. 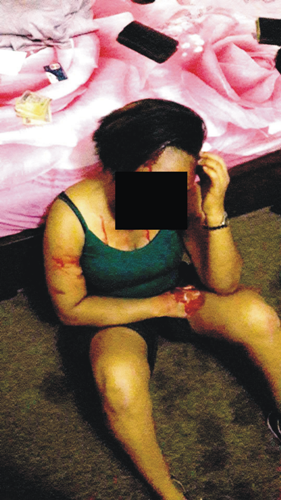 Rita after the attack.

The incidence she said happened on the evening of Sunday, 17, on a street close to her brother’s house in Lagos.

Rita told NoStringsNG after the deadly attack that she managed to escape with the help of a store owner after sustaining serious injuries on her head and other parts of her body from the beatings she got from the thugs who were sent to kill her.

“I was coming back from a gay party that I had attended that evening when I heard voices from people standing at a dark corner of the street. They were about five men calling out to identify me. I was scared because it was a little bit late so I walked very fast to avoid any harm, but they moved very quickly and stopped me. Immediately they started hitting me and saying all sorts of things about how I left my husband to be a lesbian, and that they will burn me. I heard as one of them requested for a tire. They started hitting me with very heavy woods. I fell to the ground and started bleeding”

Rita said that she was lucky to have escaped alive, as security men patrolling the area came to her rescue.

“Two estate security men who were patrolling heard my screams, came over and was shouting (whats going on there?) and the thugs fled. I was interrogated by the security men I lied they tried to rob me and I was pleading with them not to harm me. I was bleeding from my head and nostrils. I had bruises on my arms, thighs, face, and neck. I got to my brother’s house and narrated the incidence to him he wanted me to report to the police but I refused. I was taken to a local clinic  where I was treated and discharged the next day”

Rita said that her ex-husband kept threatening her, so she relocated to Canada.

“I have now relocated out of the country to Canada where I am now seeking asylum. After the incidence, my husband sent me a text message telling me that the attack was just a tiny part of his plan and that the next attack will come with acid. I had to flee to Canada”

*Names, specific locations, and other sensitive details have been removed from Rita’s story to protect her identity so as not to jeopardize her safety.