The Lagos state government on Thursday arraigned 28 adults and 12 minors to court for allegedly engaging in ‘homosexual activities’.

The persons who were all arrested on Saturday by officers of the Lagos State police command in Owode Onirin area of the state are all males, and police claimed to have caught them having sex with each other.

They were all arrested at Vintage Hotel, a popular hotel around the area.

After spending days in police custody at Panti police state, the minors and adults were arraigned before Ebute-Metta and Yaba Magistrate Court respectively. 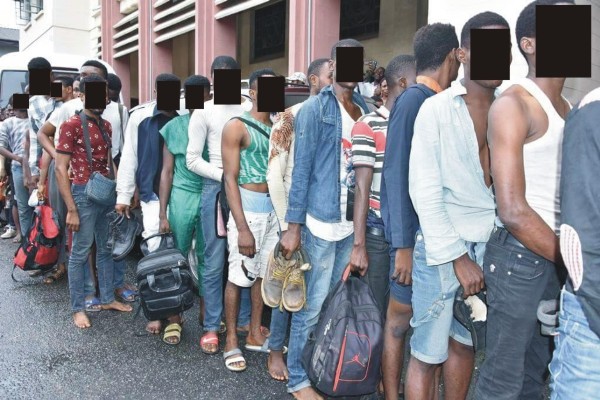 Picture showing some of the 28 Adults at the Court premises

According to charges leveled against them, the defendants were said to have “On or about 29th July, 2017, at Vintage Hotel, No. 999 Ikorodu Road/Toyin Close, Weigh Bridge, Owode Onirin, Lagos, in the Lagos Magisterial District, did engage in gay activities by permitting male persons to have canal knowledge of themselves against the order of nature and thereby committed an offence punishable under Section 261 of the Criminal Law of Lagos State, 2015.”

After the charge was read to the defendants, they all pleaded not guilty, while their lawyers – Ehiko Onoche, S.M Oladele urged the Court to admit them to bail. The prosecution team led by Ms Adetutu Oshinusi from the Directorate of Public Prosecution (DPP), Lagos State Ministry of Justice did not oppose their bail application but urged the Court to direct the defendants to submit themselves to the Lagos State Aids Control Agency (LSACA) for monitoring and Lagos State Domestic and Sexual Violence Response Team (DSVRT) for rehabilitation. The officials of both agencies were also present in court. 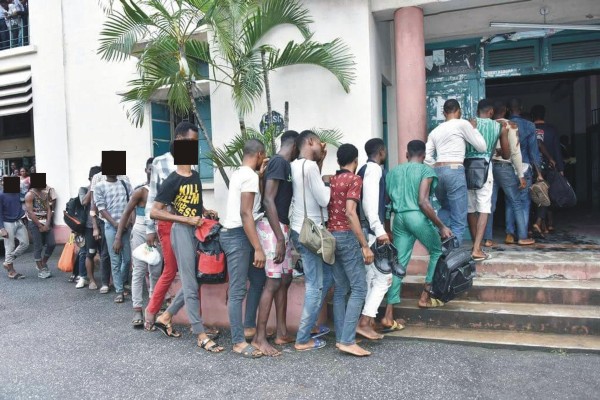 Picture showing some of the 28 Adults at the Court premises.

In his ruling, Chief Magistrate Adewale Ojo granted bail to the defendants in the sum of N500, 000 and two sureties in like sum. One of the sureties, according to the Court, must be a relative of the defendants, while the other must be resident within the court’s jurisdiction. The sureties must also present evidence of tax payment. The Magistrate also granted the request of the prosecution demanding monitoring and Sexual rehabilitation for the defendants, while the matter was adjourned to September 8, 2017. The minors were arraigned before Magistrate Segun Elias of Ebute-Metta Magistrate Court in a closed-session.

The minors have all been reportedly bailed while the adults were sent back to Panti police station.