Watch the gay themed cartoon film everyone is talking about

A beautiful and well put together romantic short gay cartoon film is making rounds on the internet all because of its extraordinary powerful message and unique portrayal of love between two same-sex animated characters. 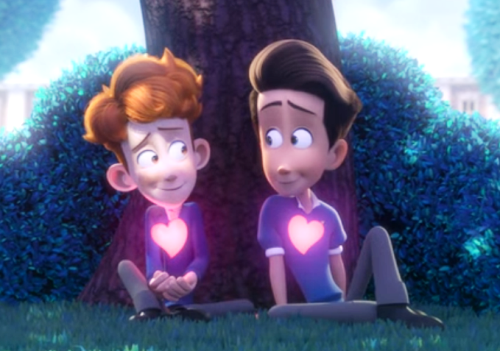 The cartoon titled ‘In a Heartbeat’ premiered on YouTube. It tells the story of Sherwin, a closeted gay boy who risks “being outed by his own heart after it pops out of his chest” to chase down his crush, Jonathan.

The short animated film by Esteban Bravo and Beth David was produced at the Ringling College of Art and Design.

416 people donated $14,191 to support the making of the film on Kickstarter.com which is four times the expected amount for the project.

Bravo and David expressed their excitement with the impressive turn out of the project.

“It’s a film that deals with a real and personal topic in a very sweet and lighthearted way and we are so excited to be able to share it with you!” They said.