#EndSARS Crisis: Here’s how you can support LGBTIQ+ Nigerians

LGBTIQ+ Nigerians are suffering from violence and economic hardships triggered by the #EndSARS protests that have spread across the country. You can help bring them relief by making a donation to supply them with emergency food, shelter, and medical care.

Since the beginning of the protests against the notoriously brutal and corrupt Special Anti-Robbery Squad (SARS), many LGBTIQ+ persons have joined the protests online and on the streets, seeking an end to police brutality and the frequent abuse that they suffer on the basis of their real or perceived sexual orientation. 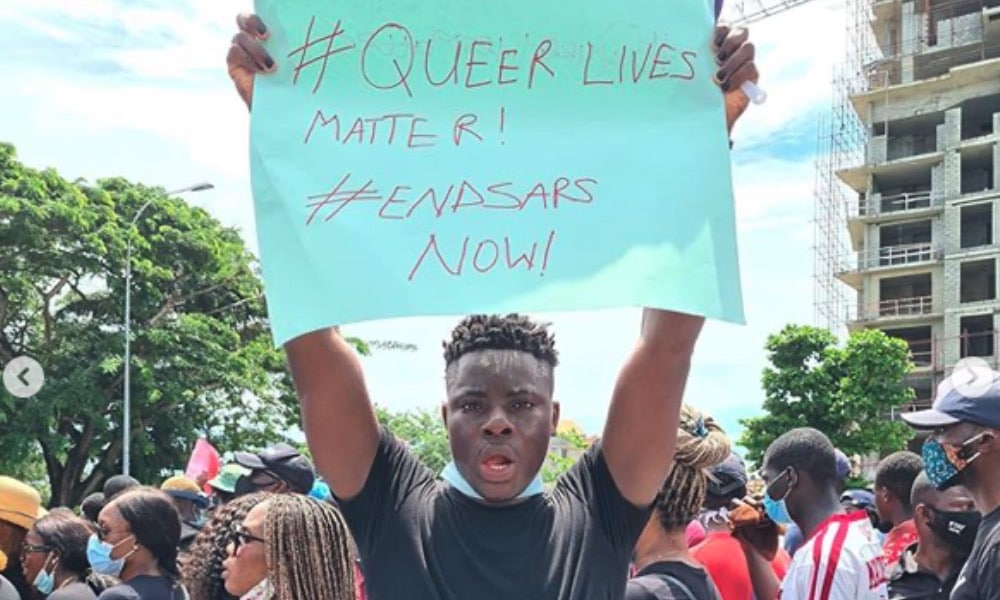 Early in the protests, which began early November, some queer Nigerians reported being attacked by homophobic anti-SARS protesters who objected to them carrying placards with LGBTIQ+ inscriptions on them. Some protesters have criticized slogans such as “Queer Lives Matter”, claiming that LGBTIQ+ people’s involvement in the protest was undermining the overall purpose of the protest against police violence.

Timinipre Cole, a lawyer, writer, and queer protester, stated: “It made me realize that probably half of the people I protested with would not have been out to protest if SARS targeted just queer folks. It wouldn’t have been their problem.”

President Muhammadu Buhari agreed to disband SARS, but the protests against all forms of police violence continued and intensified.

Buhari says 69 people nationwide have been killed so far in the protests.

Some injured LGBTIQ+ persons in Lagos were able to get medical care, food, and temporary shelter provided by SAFE HQUSE, an initiative by a group of queer Nigerians supporting LGBT protesters.

However, many other LGBTIQ+ persons have also been affected especially since most locations are under a 24- or 48-hour curfew, imposed by the government in an attempt to put an end to the killings and unrest. 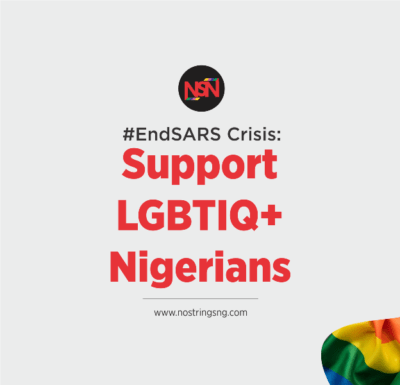 Many LGBTIQ+ people have been stranded away from home in need of temporary safe shelter, short on food, or needing medical attention.

Many reached out to NoStringsNG seeking help such as what the organization provided this past summer in an earlier crisis — the LGBTIQ+ Nigerians affected by the Covid-19 lockdown. In that program, supported by a U.S.-based charity, 220 persons were selected and received support for food supplies before the funds ran out.

All funds donated to us will be used to support members of our community who are in dire need of a temporary place to stay, food, and medical support.

To receive donations, we have partnered with the St. Paul’s Foundation for International Reconciliation, a U.S-based charity working to promote LGBTIQ+ equality around the world.

Colin Stewart, president of the St. Paul’s Foundation, publisher of the Erasing 76 Crimes blog, and co-founder with Daemon of the African Human Rights Media Network, said:

“The St. Paul’s Foundation is pleased to partner with NoStringsNG to provide aid to LGBTIQ+ Nigerians whose lives have been disrupted by repressive violence against protesters seeking an end to the brutal SARS police force and all other forms of police violence.

“All funds donated to the St. Paul’s Foundation for this project will be passed through to NoStringsNG and distributed to LGBTIQ+ Nigerians affected by this crisis. The foundation’s assistance is necessary in this case because PayPal does not allow funds to be transferred into Nigerian accounts.”

To make a (U.S. tax-deductible) donation via PayPal to support this fundraiser, use the button below.