Throughout history, gay people have been subjected to all forms of discrimination, and homophobia often founded on several myths and stereotypes.

Below are 7 of those lies, myths, and stereotypes. 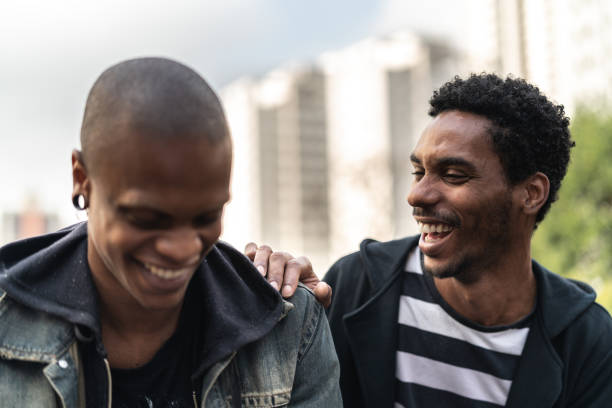 Being gay is not temporal and it’s not something that can be outgrown, neither is it a choice. True, people can choose to stay celibate, that is, decide not to engage in sexual activities with persons of the same sex, but sexuality isn’t all about sex, but about how one feels, emotionally, physically and sexually and this is nothing that can be changed or altered.

Gay people are like everyone else. There’s nothing absolutely wrong with who they are. True, there may be some evil or bad gay people. But this has nothing to do with their sexual orientation, the same way there are bad heterosexual people who do bad things too. People are just people.

3. It’s all about lust not love

Many ignorant people believe gay people are obsessed with sex and not capable of giving and receiving love. But this is not true. The real problem is homophobia. LGBTQ+ people mostly grow up in homophobic and heteronormative environments where their feelings and emotions are largely invalidated and often told that they are wrong. Internalizing these falsehoods leads to a long-lasting nurturing of self-hatred and questioning. Also, there’s the issue of a lack of positive role models.

However, given the increasing positive visibility around the world both in the media and in countries where same-sex marriage is allowed, LGBTQ+ people are starting to feel liberated as they see others who are living their authentic lives and thus, have come to realize that it’s possible to fall in love and maintain healthy relationships.

4. They can’t be religious or spiritual

This is very controversial. However, if we understand that homosexuality is not evil or unnatural, then it makes a lot of sense to agree that a person’s sexual orientation does not invalidate their strong convictions and belief in a deity, or erase their ability to be good Christians, Muslims, etc. Also, various research studies have shown that certain religious texts usually referenced by many as anti-gay is widely misunderstood and misinterpreted.

Evidently, there are many closeted religious leaders out there, as well as out gay bishops, pastors, and what have you.

Bottom line is that gay people can be anything. Their sexual orientation is not and never a barrier to what they can achieve or do. In fact, it has no bearing whatsoever on their abilities and the pursuit of their dreams.

Read related: Opinion: No, being lesbian, gay, bisexual or transgender is not a sin

5. They all have HIV

Yes, inasmuch as LGBTQ+ people are more susceptible to contract HIV. It is not true that they are all living with HIV. It is important to note that anyone can get HIV if they do not protect themselves whilst engaging in sexual activities with others. Besides, HIV can be contracted through other means other than through sex. However, discriminatory laws and stigma is the major cause of increased HIV infection within the community.

In many countries, gay people are restricted or denied access to healthcare and are often ridiculed and stigmatized based on their sexual orientation. Limited or no access to HIV testing and treatment options increases infection rates.

6. They are all pedophiles

Pedophilia is the act of engaging in sexual activities with a minor. This absolutely does not have anything to do with a person’s sexuality. In fact, homosexuality and pedophilia are completely unrelated.

Yet gay people have been tagged pedophiles mostly by homophobes. True, there are gay people who are into the habit of engaging in sex acts with underage persons, likewise some heterosexuals. In fact, we have seen that this is even more common within the heterosexual community.

We have witnessed many cases where heterosexual men go-ahead to marry and rape underage women, yet gay people get all the blame.

It’s still very surprising that many people still believe that all gay people act ‘girly’. This is not true at all as a person’s physical appearance does not determine their sexual orientation. Yes, true most gay people are effeminate, but this does not take away the very fact that there are equally many gay men who are masculine-presenting.

HIV+ and gay in Nigeria? 4 Nigerians tell their stories of what it’s really like