Homosexuals Do Not Choose To Be Homosexuals – Archbishop Desmond Tutu 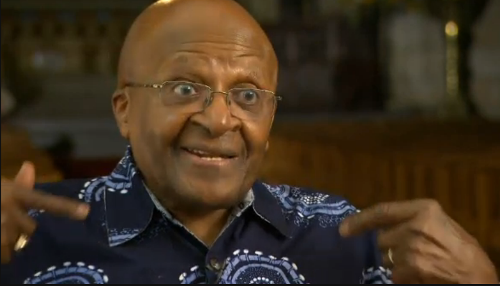 Archbishop Desmond Tutu, who led a decades-long fight against racial discrimination in South Africa, says the oppression of gay people around the world is the “new Apartheid.” The retired Anglican archbishop spoke openly with NBC’s Ann Curry about God, the bible and homophobia.

In a sit down with Ann Curry of NBC joined by his daughter, he said;

When asked about if he thinks that God hates gays, he said:

“I am absolutely utterly certain that God wouldn’t be homophobic. I rather go to Hell, than go to a homophobic heaven”

He also spoke about the long standing arguments concerning the bible’s rejection of homosexuality. He said:

He concluded by saying:

“God sits there, and weeps, because God is saying, you know what? You are all my children, you are all members of one family, my family, and when are we going to learn to live amicably together?”